I was on a shoot in and around Cleveland and we had a day off in the middle of our scheduled days so my assistant, Robb Reece, www.robbreecephotography.com, and I headed of to do a little shooting in City. Being from Western Colorado, we don't have the opportunity to shoot in this environment very often so like to look around a bit when we have the chance.  The visuals are, as you can see from most of my other work, very different, thus, very interesting. 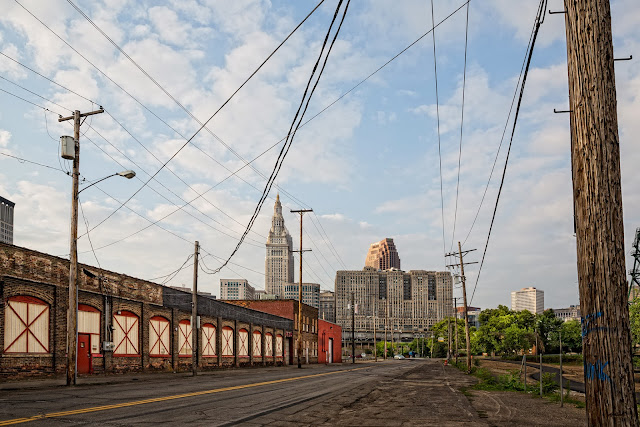 The patina on all of the industrial era building told such a great story of that time in America's history during a period of such expansion. The discovery of steel and oil bi-products and the toil of the everyday man trying to provide for his family. Not that there are guarantees in life today I think of how difficult it had to have been back in the early 1900's. The weathering on the old brick buildings reminded me of lichen on a piece of granite in a talus field in the high country. 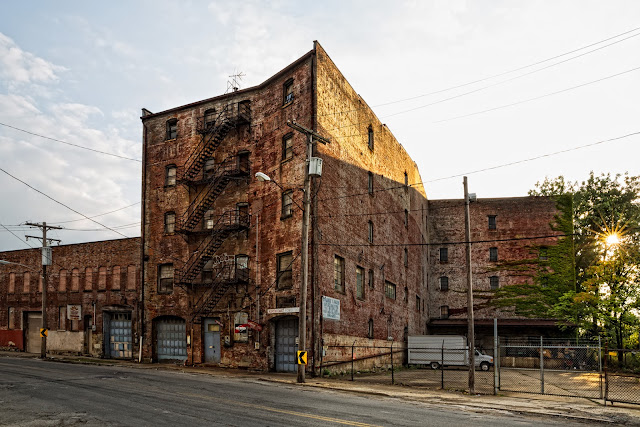 I always loved the neatness and order of the little neighborhoods that sprang up around the city to house workers. Each with their ethnic concentrations.  It was from these little townships and streets that the boys went off to fight in the World Wars. From these porches daughters were picked up for their first dates and Dad went of to pull his shift. I was impressed by the waterways that are still fully in use that spread our commerce from the Great Lakes. Bridges radiating out from the central part of the city creating access to the industrial areas. All the while we were shooting, we were looking for a spot we could end up shooting from that would give us an elevated perspective for the mandatory unobstructed "skyline" photo. 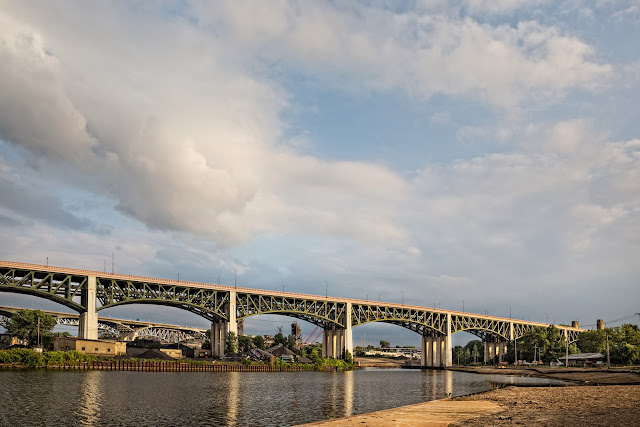 So many of these old businesses that were apparently still working and some, under the same name. Texture and contrast everywhere. 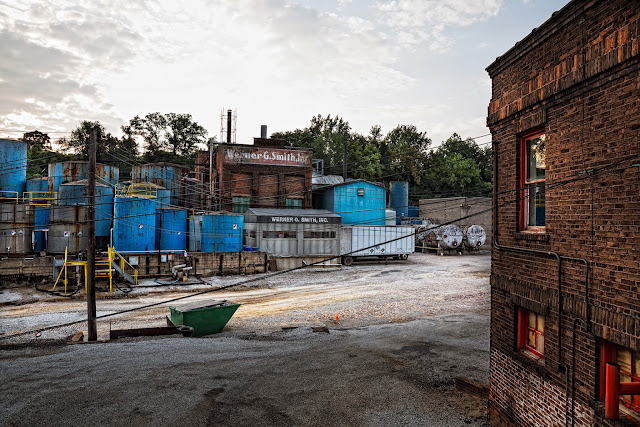 Light continued to improve with some very promising clouds as we continued our search for "the spot". Clouds make the day. There was a time when all we wanted to see was wall to wall blue. Now, just the right amount of cloud cover with a small slice of clear on the Western horizon. Just fun to watch if nothing else. 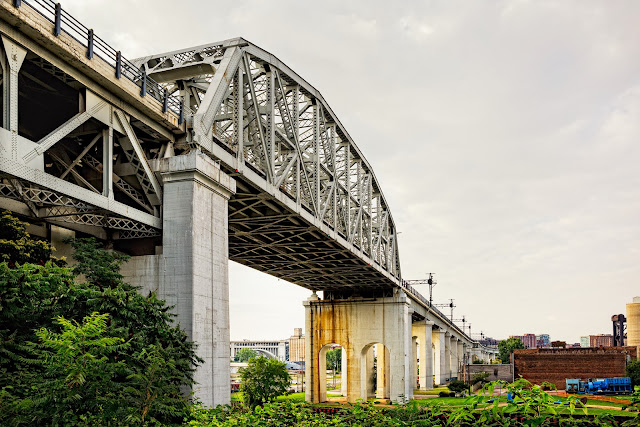 We found our spot. As luck would have it, a transport ship was moving in along the water way. This really helped complete the story of this image. Finding just the right angle took a little time. Just enough of everything to complete the foreground without compromising how the transport ship would look when it came into position. 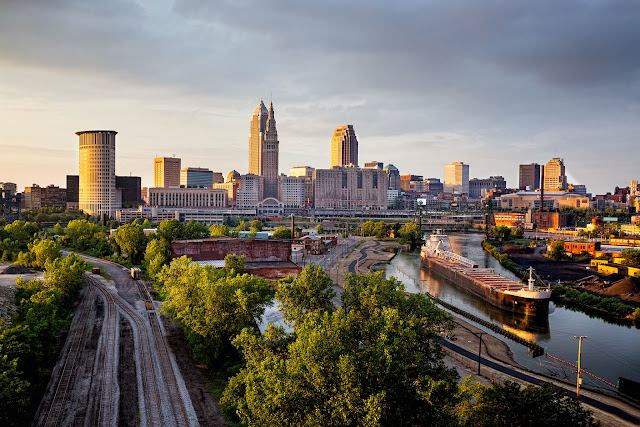 When I'm out running around with my camera and thinking of what I'd like to find, I always try to be mindful when the light is cooperating like it was this evening.  A cloud scrim can move in so easily and compromise your outcome.  And there's not a darn thing you can do about it other than adjust your approach. 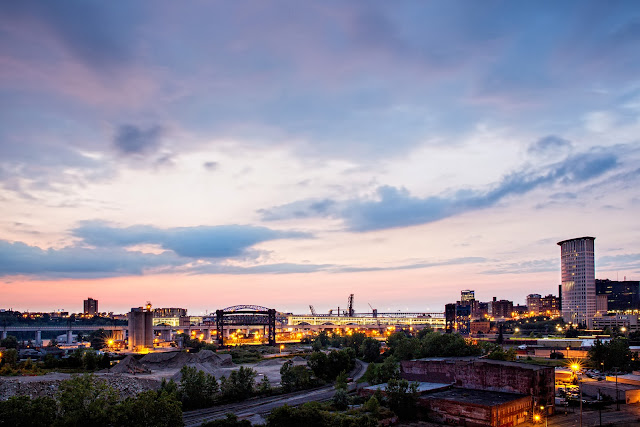 I was out scouting props and locations for a shoot I had coming up when I stumbled upon this
beautiful 1949 Chrysler Royal sitting in a gravel lot next to an old cinderblock building down in
the industrial part of town. Kinda caught it in my rear-view mirror so decided to circle back
to locate it's owner in the next day or so. When I returned the Chrysler was gone, but there
seemed to be some life in that old building so I went over and poked my nose inside and found
Bob Cherveny hustling around.  He gave me a friendly greeting and I found out that the '49 was
his. He was glad to allow me to use it in one of my shots, but I realized that the real shots were
right there in his machine shop. 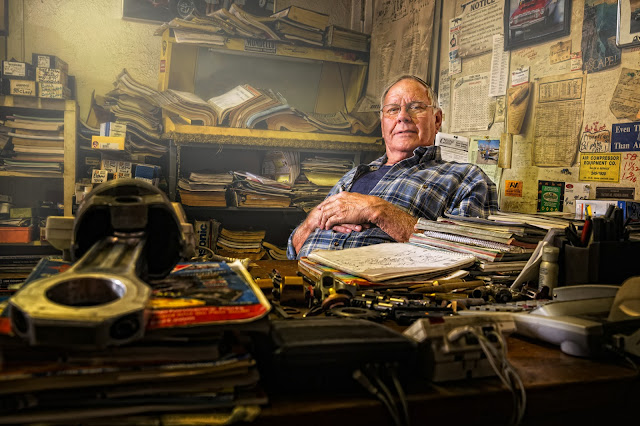 Bob is an automotive machinist and has been working in this building for 35 years.
Technically he's retired, he tells me, but still working. Loves what he does. The long time

accumulation of tools and machinery was a beautiful visual, but what really had my attention
was the smell of grease and metal. Reminded me of my Grandfathers machine shop out back of
his house when I was growing up. Only thing missing was the wonderful smell of cigar smoke.
This kind of photography is the gold standard for me because of the grit and texture, but also
the story of the Americas worker who is actually still making things or provide a service
that people need. My Dad was a grocer when I was growing up and my affinities lie with
the workers that make this nation work. Always most comfortable in this environment. 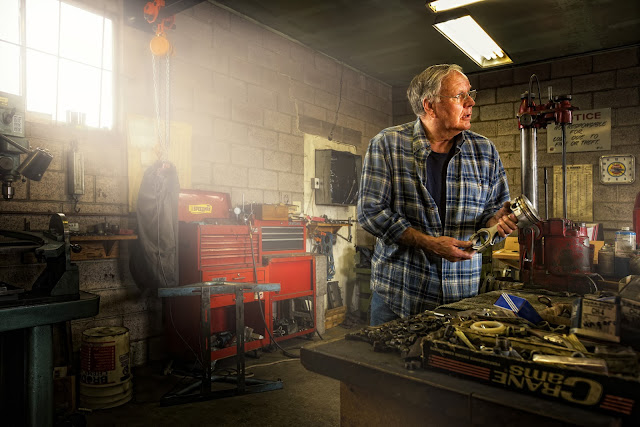 I asked and Bob and he consented to allow me to come by and shoot him and I basically just
followed him around as he worked and shot using the beautiful north light streaming in from his
well placed windows. A photographers dream. I had to push my ISO a bit to 200 and handheld a
pretty slow shutter to allow for a bit of depth of field. Probably about a 15th of a second at
about f-8. I just waited for that lull in his movement and wedged myself into or up against
something solid to still the camera. I find myself shooting this way quite a bit when I want a bit
of spontaneity. Especially when I'm imposing myself on someones time and want to be
invisible. 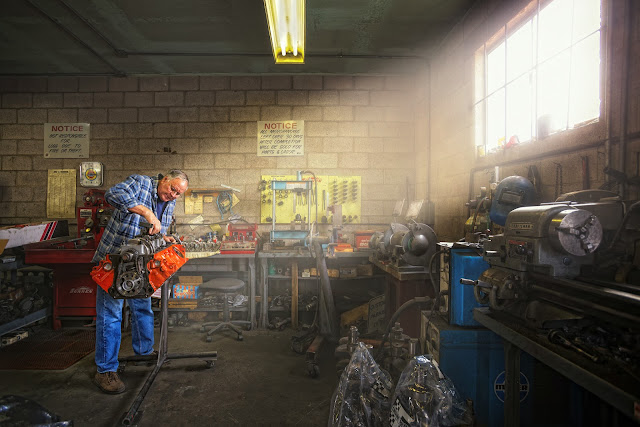 I loved the shots from out in his shop because they rounded out his story, but knew I had to come
away with something of Bob working at his desk. This was the real story. This was a space
that has been decorated with thirty five years of running his business and if it weren't for the
answering machine and telephone in the foreground, the setting might have been from 1949 as well.
Truly timeless.
From this place, Bob has taken care of the needs of his clients,
community and his family. And without much ceremony. Just good work for a fair price. 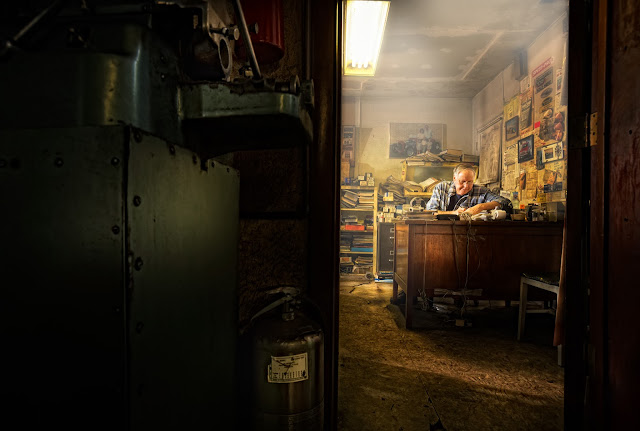