I have been having a blast lately as I've gone back through my old 35mm ski photography
in an effort to reach out to and re-recognize all of the great athletes I had the honor and pleasure
of working with back in the last millennium when I lived in Vail, Colorado and shot for
many of the ski equipment and apparel manufacturers. All of the images below were from the
film era and scanned from 35mm transparencies. Ski photography has, as one would expect,
made great strides as todays new photographers push the physical limits of the outdoors
and have the great advantage of the digital sensor.

Here's a bit about each of the people featured below. 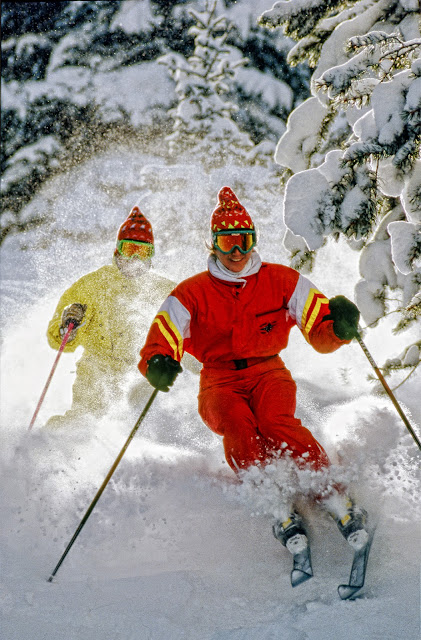 Don't try this at home.
This is the second in my series for "Throwback Thursday" featuring The unmistakable smile of the then Amy Wheeler (I do not know her married name) followed closely by Mike Kloser. Who actually skis like this ? I used to put my skiers in this "tip to tail" formation to accomplish the cover crop we were always looking for. My ski models were always top notch and gladly willing to attempt anything I asked them to do.
Lower Snag Park, Vail Mountain, circa1990 +- 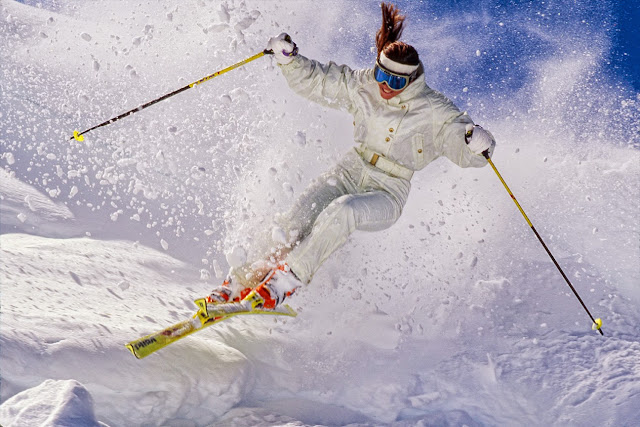 Launching from Ptarmigan Cornice Lookin' for an LZ.
I haven't seen Kristi Brown Lovell for a while, but I know she's still out there tearin' it up, although now she has 3 little ones to tear it up with. Just Kristi Brown to me, she was one of my favored standby lady ski models who always made my job fun and super easy. I shot with Kristi when ever I could, but am not sure what the occasion was here. I suspect it was on one of our Descente Skiwear shoots in about 1991 or '92, maybe 1993 out on the "cornice" on Vail Mountain. Obviously one of those cold days after a storm had blasted through.
The athleticism and ability of all of these skiers to hit their mark always blew me away ! As I go back through my files I'm realizing that I may need to post 3 or 4 shots a week in order to recognize all of the great skiers I shot at that time. 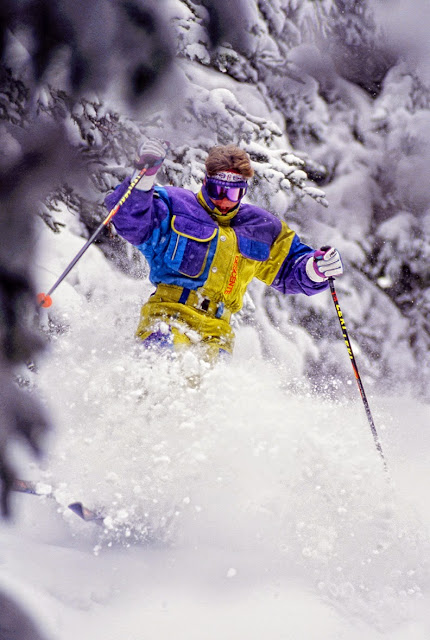 So it is that people that grow up in Aspen know how to ski.
This is Mr. Ian Murray "twistin' " in Glade Park on Vail Mountain circa: around 1992 or '93 on another Descente photo shoot. Ian first came into my studio as a running model, but we immediately saw the potential with him as a ski model. He was made for the job and was equally comfortable on the ground and in the air, Ian always brought great energy to our photo shoots, both on snow and during our summer shoots. Whenever he was in town (from Aspen) he would stay with us at the house and I remember how much my daughter, Lillian, was in love with him when she was about 2 years old.
We lost track of Ian, but have recently found him on FB living the dream in LA-Town. I'll be out there working on a project in December and I'm gonna try and make contact to get caught up. 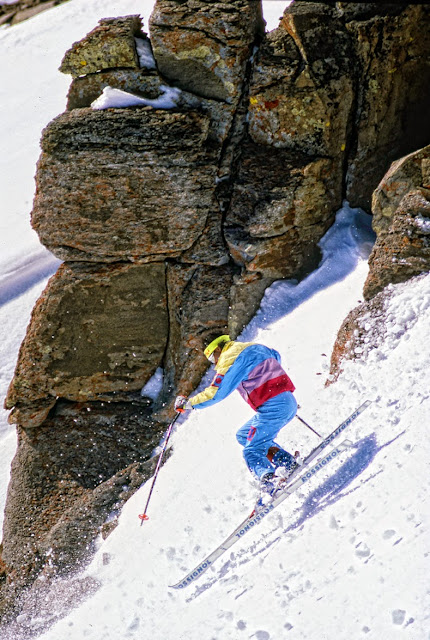 Barry Levinson was the one who got me started on this project by planting the idea in
my head of going back through my old work to pull out these images.  He is featured here,
with impeccable style, high in the mountains near Quandary Peak, Colorado on a heli-
ski shoot although I can't recall who we are shooting for. 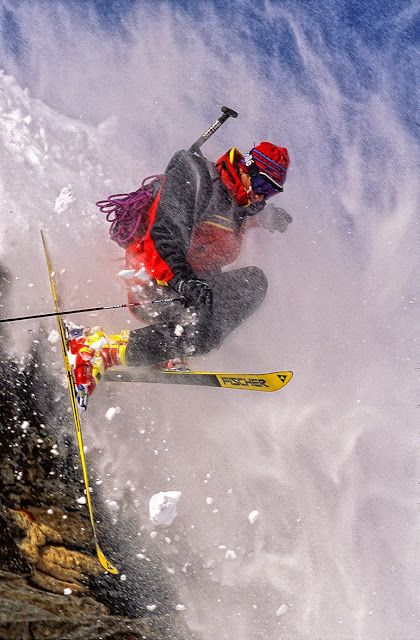 My memory was called into question this evening by Vail Photographer, Jeff Cricco (one of the very best machine-gunners in the business, today) when he vary diplomatically corrected me and identified the style of the skier in my first post as that of Andy Henkes. 20 years can cloud the memory a bit so Camille and I went back to the light table for a second look and the consensus is that I get to post twice today. Not a bad thing. Barry Levinson also confirmed and here's the shot that had me confused. Kinda understandable. Now that I'm looking at my first post more closely, the style is, in fact, the impeccable style of Andy.

I could go on about working with Andy, but will save that for another photo I have of him in the queue.
Many thanks to Jeff and Barry for their honesty and observant eyes. 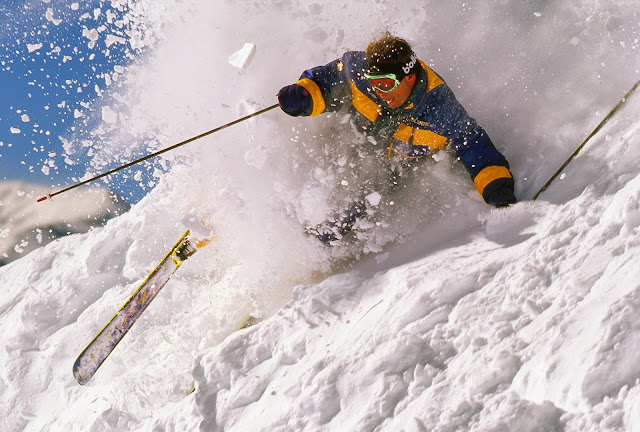 Sandy Treat came out to ski for us when I was shooting Descente about '90 thru '92 in Vail and Aspen. This was a crystal clear day in February at Vail after a storm blew out and the temp never rose above -30°. It almost hurts to think about how cold it was and we had to be out all day. Keeping my fingers and batteries warm was always the challenge on those days.
Sandy was the perfect skier for me. Always hit his mark with a smile !
Thinking about Sandy Treat a bunch these days. 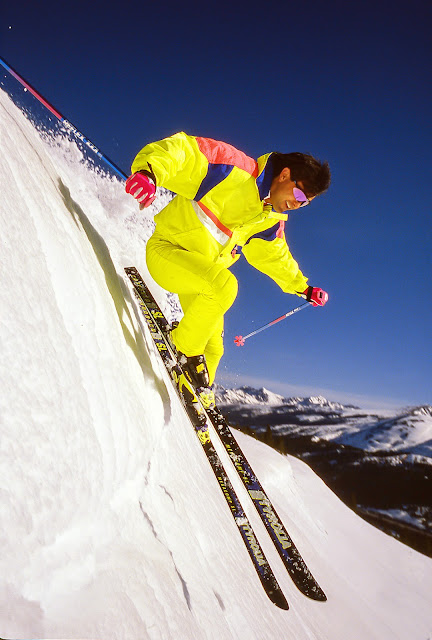 I always enjoyed it when we could get Mike Brown to ski for us, not only because he was, well, let's just say, he could arc a turn, but also because he was (is) such a nice guy. Pictured here on Vail Pass, most likely because Vail Mountain had already closed and we needed to get these skis and boots shot. This is a dawn spring "corn" shoot circa: 1989 (+ -) and I love the day-glow yellow, all the rage then. Sorry I couldn't change the color of the Helly-Hansen apparel, Mike. Looks good on you, though.
A big congratulations to Mike for his induction into The Colorado Ski & Snowboard Museum and Hall of Fame. Proud of Mike. 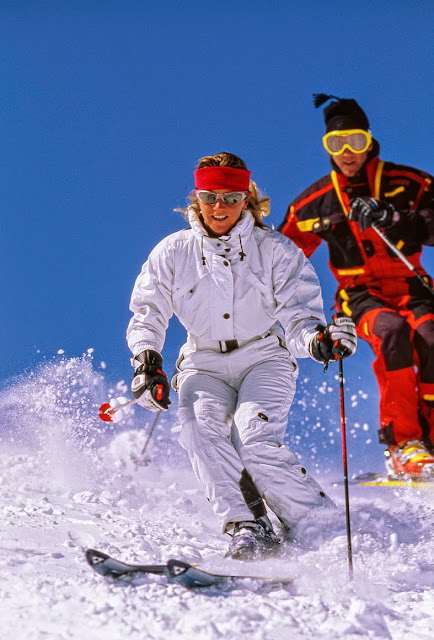 Circa 1995, Terry Bianchi-Armistead in perfect form on some nice soft packed powder on Vail Mountain on a perfect bluebird day. Andy Henkes chasing. I met Terry on A Dynastar shoot that I was doing, casted as our female skier, and ended up putting all the boys to shame and doing the work of my assistants at the same time. I thought to myself... I have to hire this lady. She became my office manager and help me with all of my photo shoots for many years to come. Terry and I are still good friends and I got to see her and her husband Jeff and four children in Vail in September.