My across the street neighbors, Darrel and Ingrid are master gardeners. They are
retirees and their yard is a wonderment of perfection with every plant, tree and flower
meticulously placed and every scrub perfectly planted and pruned. They have inspired me
to keep my place nice, and pretty, so it will nicely coexist with theirs. Only difference is,
if you look closely at my yard, you won't see the thoughtfulness and perfection.

I was around back of their place a couple of months ago and noticed a nice fenced in garden
with little grayish clumps all in rows, row after row and I really had no idea what they had growing in
such an orderly fashion.  Just a bunch of whiskery bumps that looked very organized.

I was informed that they had started a lavender garden, if that's the correct word. More like a
lavender crop and I had no idea that in a couple of months each of those little humps, or whorls, would explode with little corolla's that have more uses than you can shake a stick at.

Back again, in their garage, several weeks later and drying racks abound with small, neatly banded
tufts of these little purple flowers hanging cut end up, drying, in perfect order, all
with their appropriate name tags identifying their respective species, of which 39 are known, 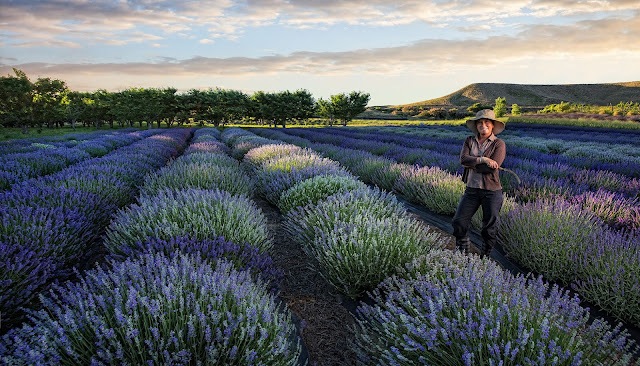 Up until this time, I'm pretty oblivious to world of lavender and, although recall that I've heard discussions on it, have only observed it out in a field as I'm driving by in my car. 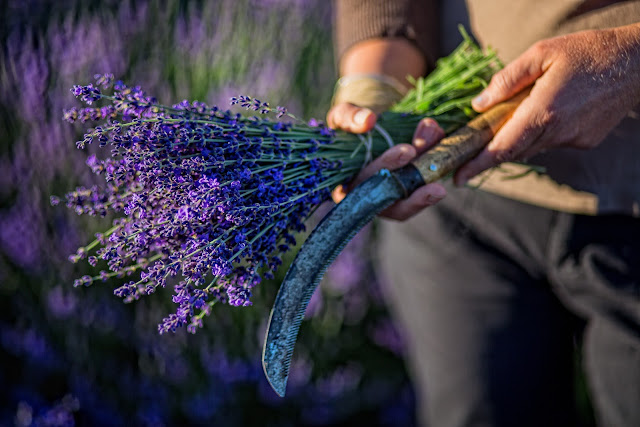 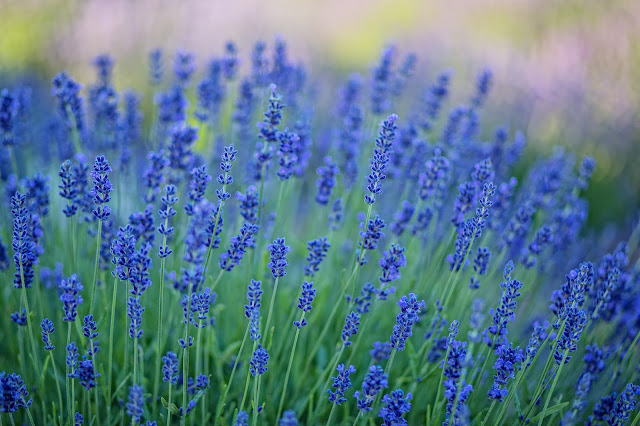 This little plant, in it's 39 species is used in about a zillion ways. Well maybe not a zillion, but
manifold uses from soap to essential oils that, in them selves, do a lot of different things.
Lavender is used in teas, room sprays, hand and face creams, scented candles, talcum powders and
culinary use, medicinal use, bath salts and insect repellents.

All the while calming everyone down and chillin' everyone out.

From what I'm told, lavender has some very notable calming qualities.

I can use a little of that myself. 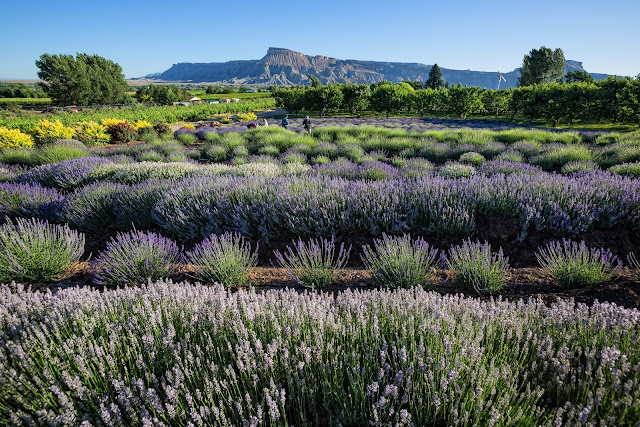 When I finally went out to photograph, I made contact with Paola Legarre, owner of
Sage Creations Organic Farm www.sagecreationsorganicfarm.com located in Palisade, CO. 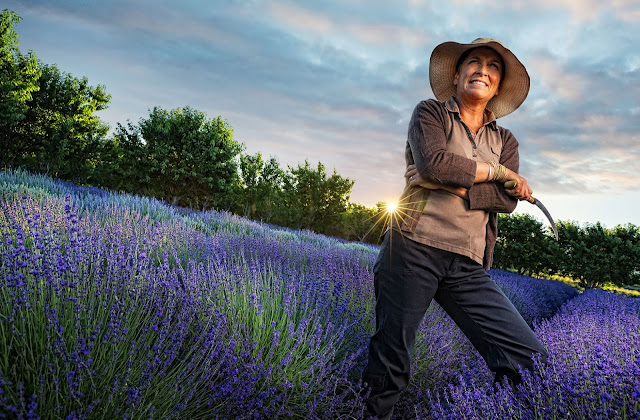 This, also was a neat and tidy little nursery operation, now in their lavender harvest, but also
specializing in cherry's and peaches. About 9 acres. I met Paola at about 5:30 am and she was
just getting her day and her crew going.

It was nice an cool. 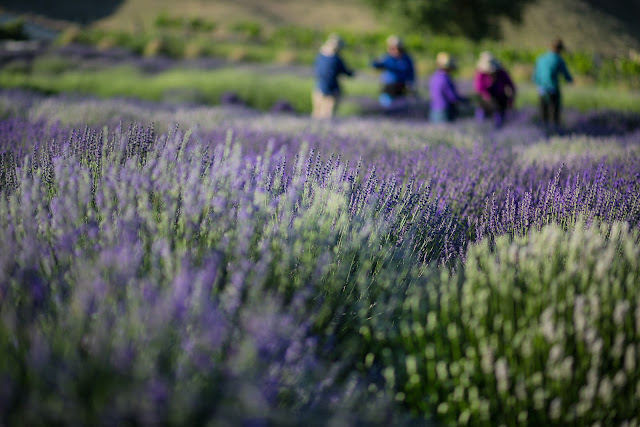 For all that Paola had going on, she was noticeably relaxed with me and gave her
undivided attention while I was shooting. I bit unusual for someone who has such a busy
operation. 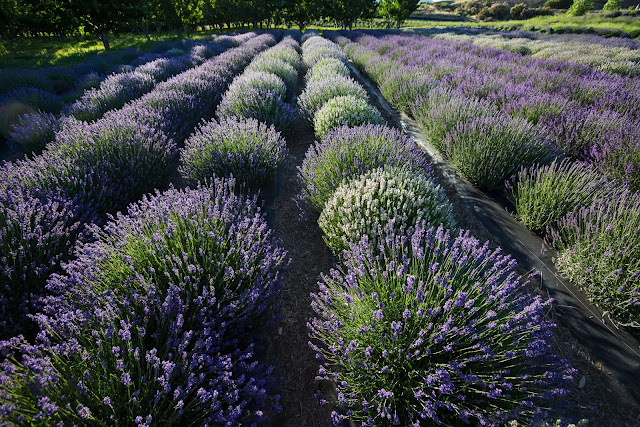 I really enjoyed her company while we were working and although we didn't have very much
time together, I learned quite a bit about her lavender, it's cycles and it's uses. 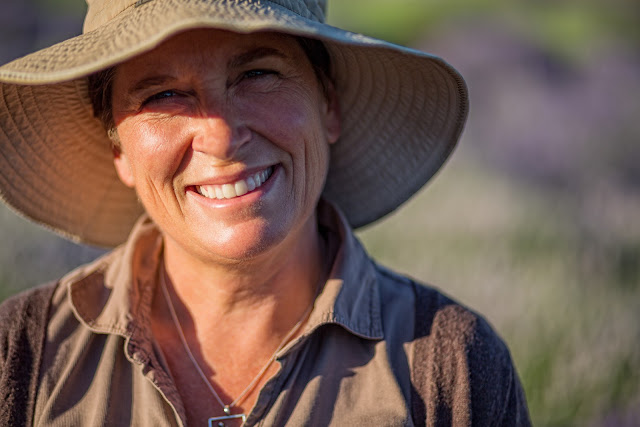 Lavender is grown in temperate climates throughout the world and used for and in more things
than can be counted. Sort of a miracle shrub discovered in the old world and used all over the world,
found as far back as 1300 BC, in King Tut's tomb, no less.

I am always on the lookout for something unusual to photograph, always.

When I'm not on an assignment, it's what gets me going in the morning and I always
make myself available to move in and move out quickly, because I know people,
especially those who are at work, don't have much time to mess around with me. 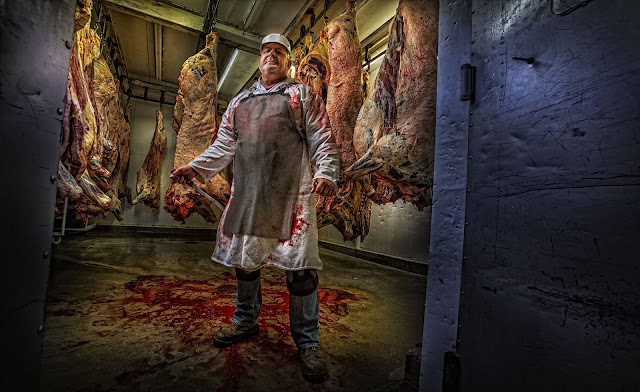 I always have one or two shots in mind when I set up and leave myself open to the
possibility of other views to round out a short story. Probably comes from my days of
shooting editorial assignments.

I lay awake at night thinking about how I plan to execute my shoots.

It's kind of a sickness I have. 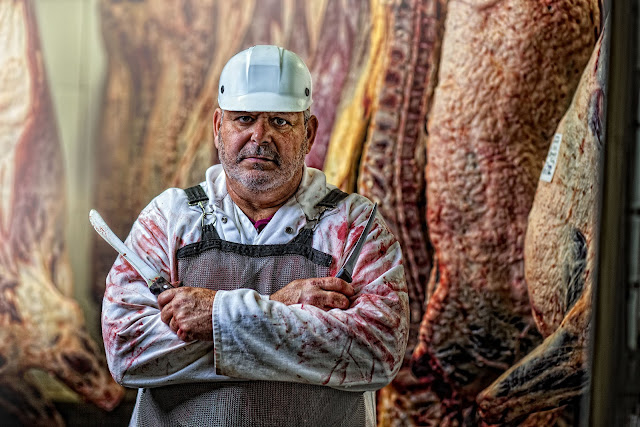 At any rate, I was down in some familiar territory in Texas recently and had recalled a
spontaneous shoot I did many years ago with Harold Keeter at the Keeter Custom
Meat Processing plant in Tulia, Texas. It was well before the days of the breezy digital work
flow, so I shot Harold with my Hasselblad and some of my beloved Fuji RVP along
with my trusty Norman 400 ws portable strobe. 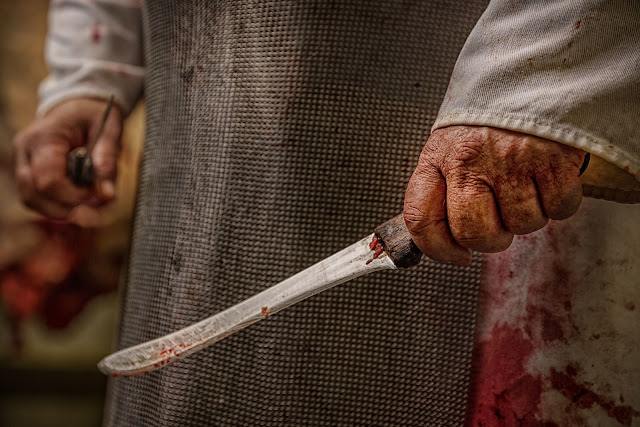 Harold is no longer making cuts, so I asked for a reshoot with his Brother Gerald. The set-up was much the same as before with older Brother, Harold, and in the same meat locker. Similar composition, styling and attitude. I was able to nab a couple of additional images this time and had much more control over the outcome in post. 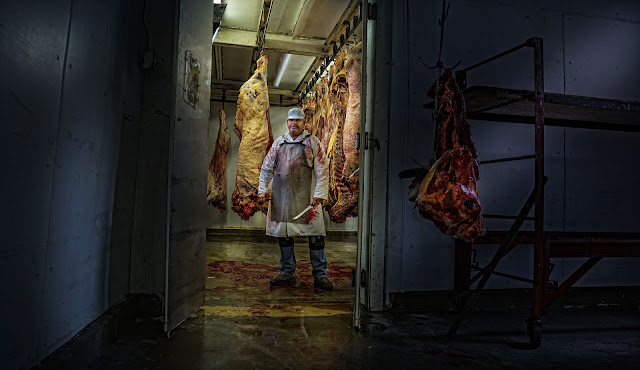 So, as it was, I had about 40 minutes to load my gear in, set up my initial shot
and bust out these 4 images. That's a neat 10 minutes per shot.

The outcome was as I had expected although a bit bloodier and perhaps a bit more
graphic than what I usually shoot and show.

If you are a vegan, I apologize. If you love a nice filet w/ your Merlot you won't mind
seeing where your steak comes from. Unfortunately, I can't claim that no animals were harmed
in the making of these photos.