I'm finally getting around to posting on an evening climb shoot I was able to do this
fall with Robert Pizem and Cecylia Dembreski on Code Red-7 in Unaweep Canyon here in
Colorado.  This is a 5:13 route of about 3-400 feet of granite.
It is late fall and very back lit with sun setting down the valley. Although it gave
everything a nice "rim lit" glow, in order to maintain the shadows it slowed things down
significantly. I wanted to be extremely mobile so needed to hand hold
a long zoom lens. I didn't want to artifact my shadows so only increased the ISO one
stop and held my breath and tried to pick key points in the action.  For the most part, other
than this first shot, and the last two, with a wider lens, I shot long & wide open and was as
slow as 1/60th of a second at times. Critical to say the least. 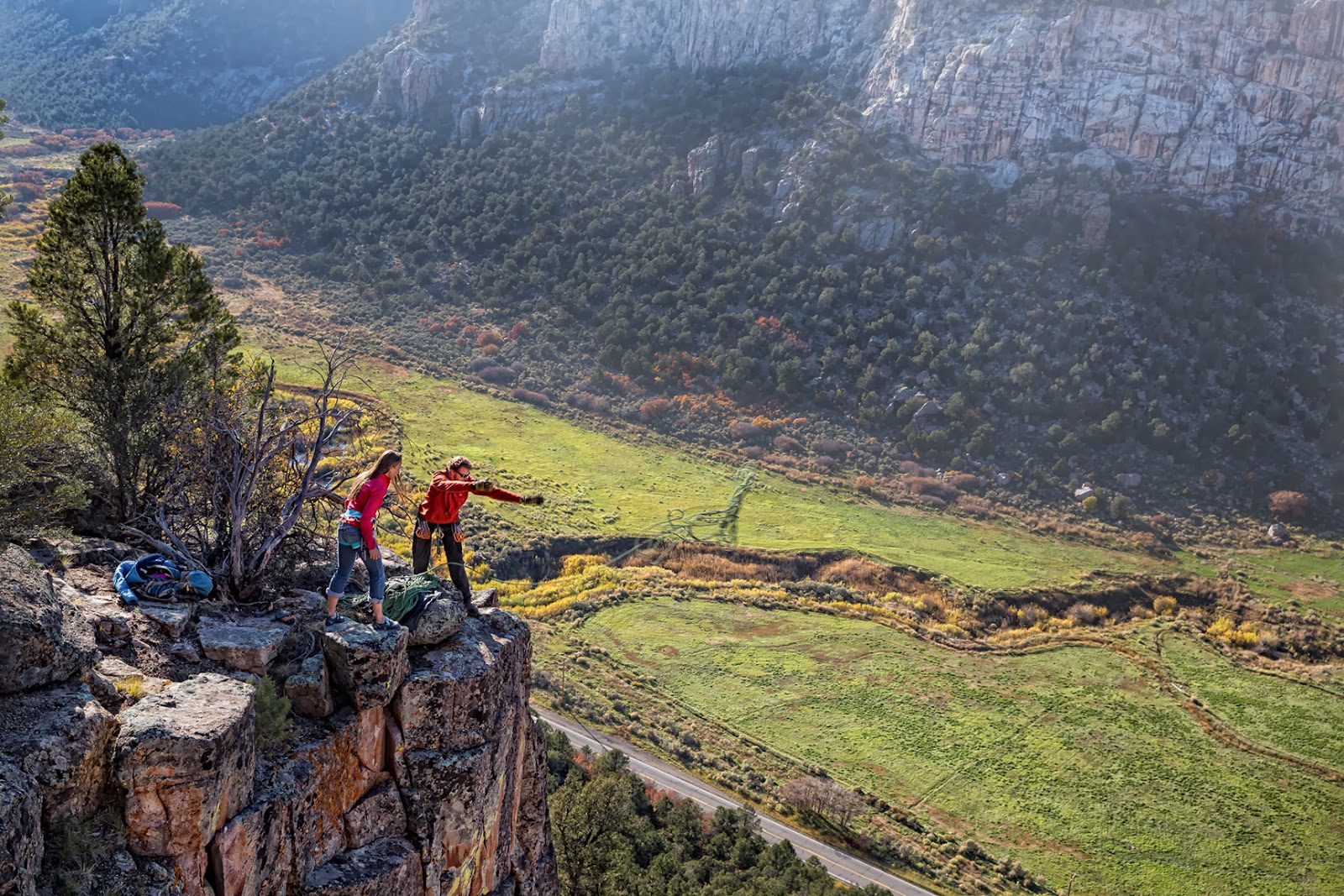 Cecylia was a strong female climber and I couldn't have casted her look better out of Central
Casting. When shooting climbing, as well as many other sports, the level of ability and
talent always trumps everything else.  It's very hard to fake climbing as well as skiing, running,
and most other intense sports like this. It's a plus to be able to shoot someone like CC that
fits the look of the sport so well. This shot is at about 300mm hand held at about a 125th of
a second so I needed to stabilize myself in a position where I could steady my camera and
traverse my lens smoothly waiting for these lulls in movement in her body.  Small things,
like the flip in her hair, portray movement. Everything else needs to be crisp, especially
her eyes and face. 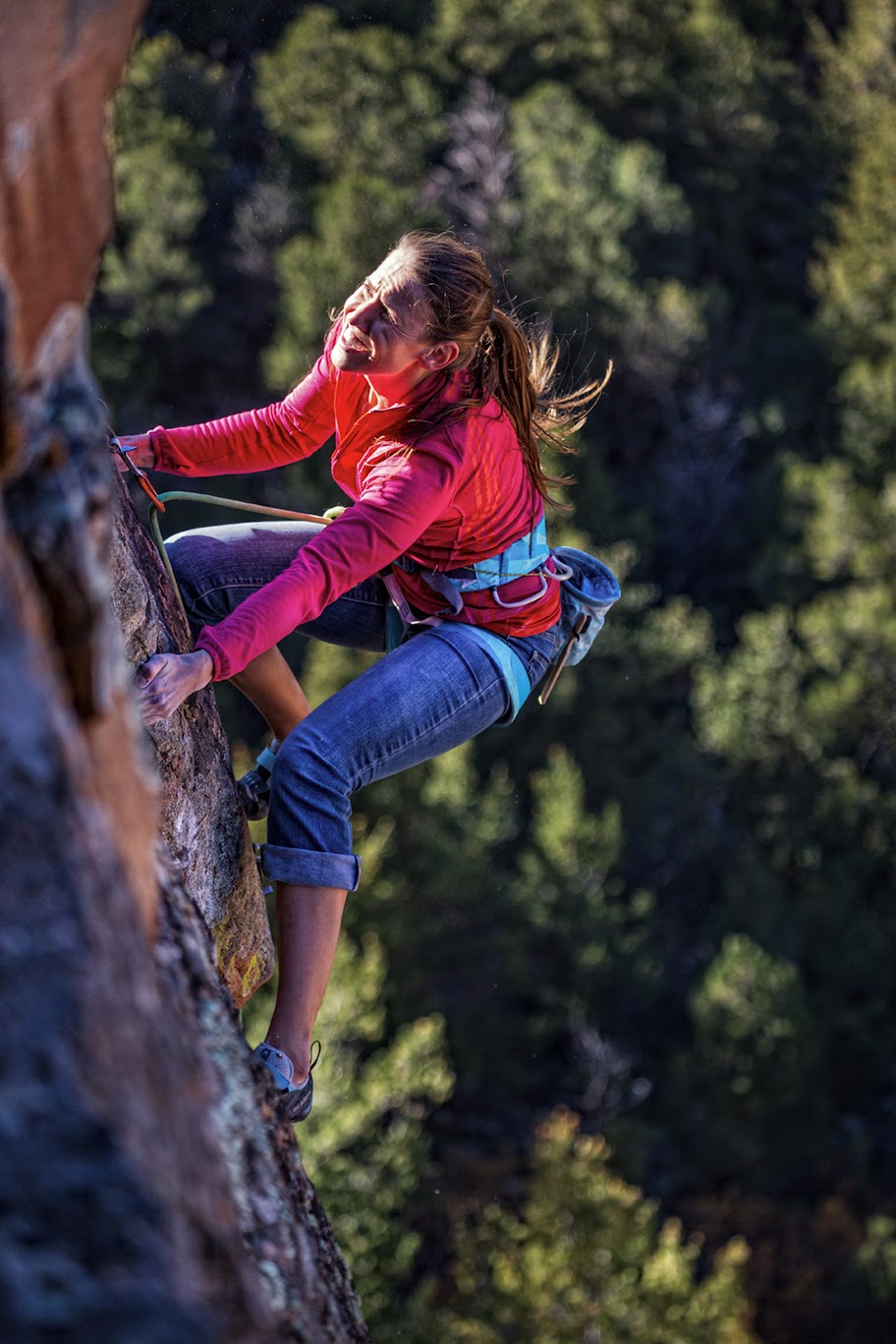 As an anchor photo in this sequence I need this shot to establish scale and to convey the committment of the climber. I see a lot of great climbing photography done by the best climbing
photographers. I also see lots of photography shot from the ground up and that doesn't show
how much distance there is from the belayer. We had ebbing light and I really needed to get things
right, so I made sure to station myself above.  having said this, and as I was moving around
the rock above CC, I need to make sure I was paying attention to myself. It would have been so
easy, in the heat of the moment with camera in hand to have misjudged the edge. 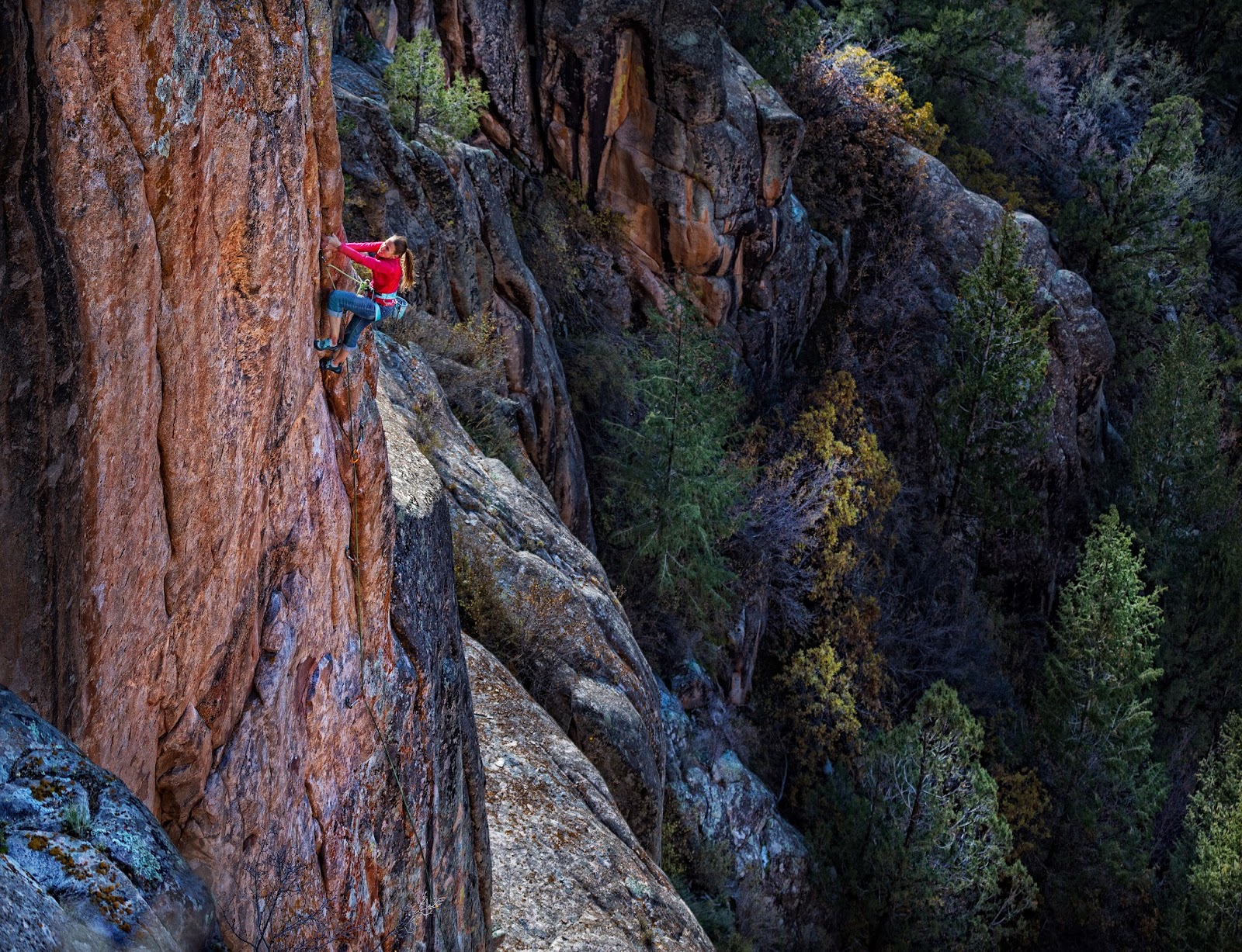 I was impressed with CC's absolute determination. She encountered at least 2 obstacles on this pitch
that fully pushed her limits and strength and she had to release. As you can see from the length
of her belay, this was about 6 to 8 foot fall. She started her fall up by that upper carabiner. With cold hands and feet. She would regroup and try again and iron out the problem. It's hard to see in this shot, but there is quite a bit of movement in her hands, feet and hair tipping off the slow shutter.
A very strong female athlete, indeed. 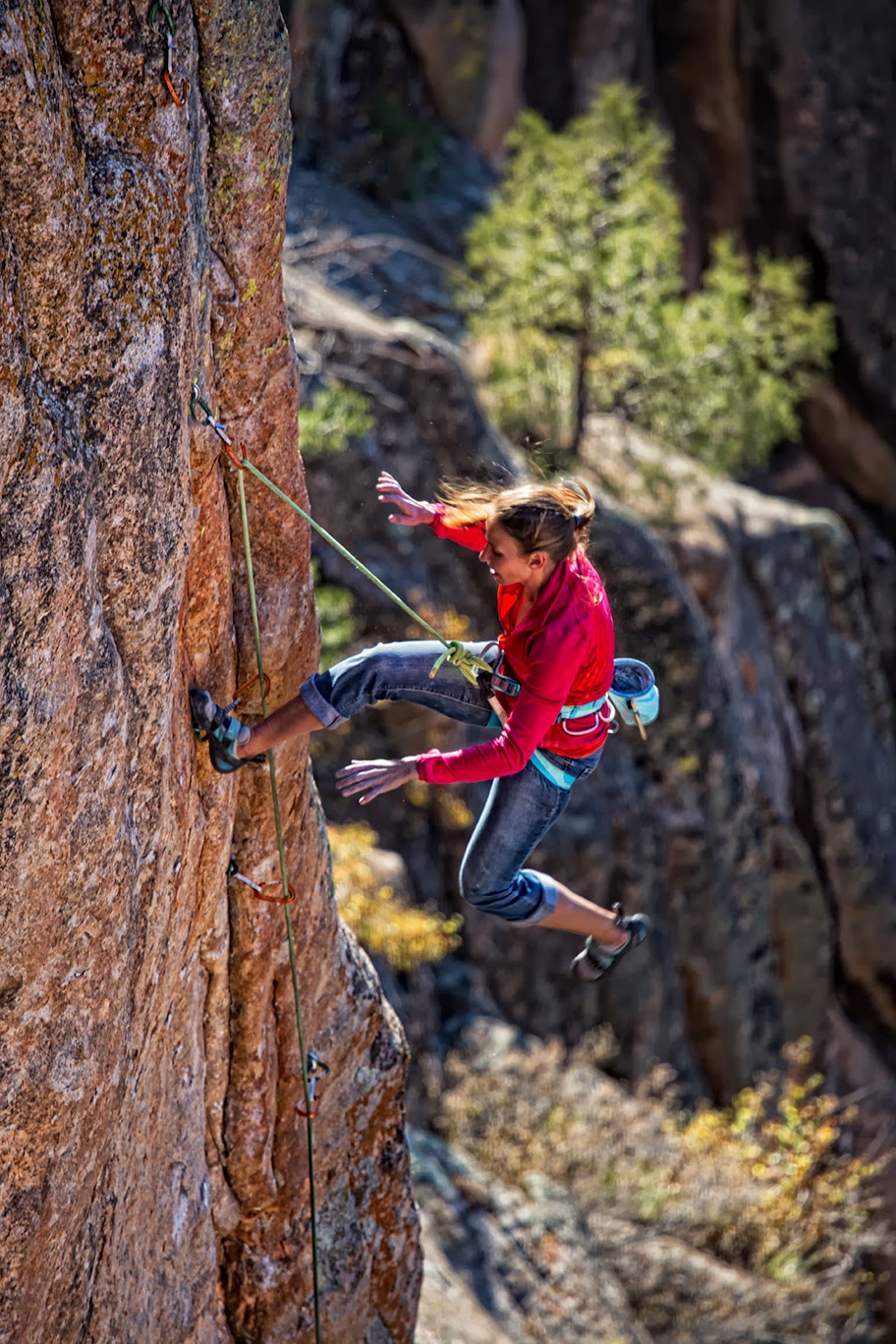 As I was rounding out the story of CC's climb I wanted to do something to show her at the
top.  Something different.  My light was all but gone so I laid on the ground to grab a
low perspective of her skinned shin, rope and climbing shoe. Robert, who was her belayer
made a good compositional element to offset the back ground. Shot nearly wide open
wit focus set on her war wound. 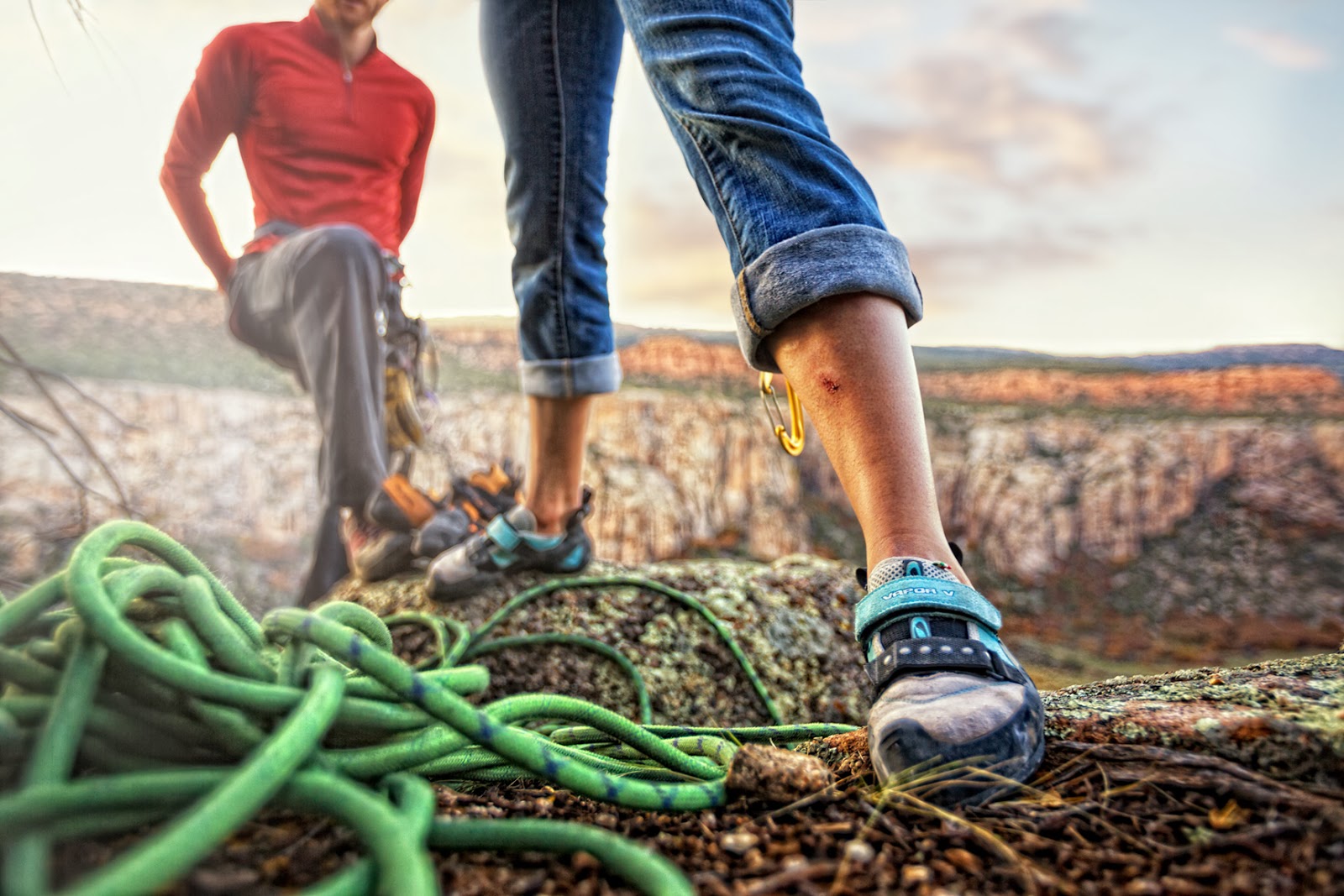 I wouldn't have been doing my job if I hadn't gotten an environmental portrait of "the Piz".
Robert Pizem is a nationally ranked climber and I can't say enough about him so I won't try
other that it's been fun getting to know and shooting with him. 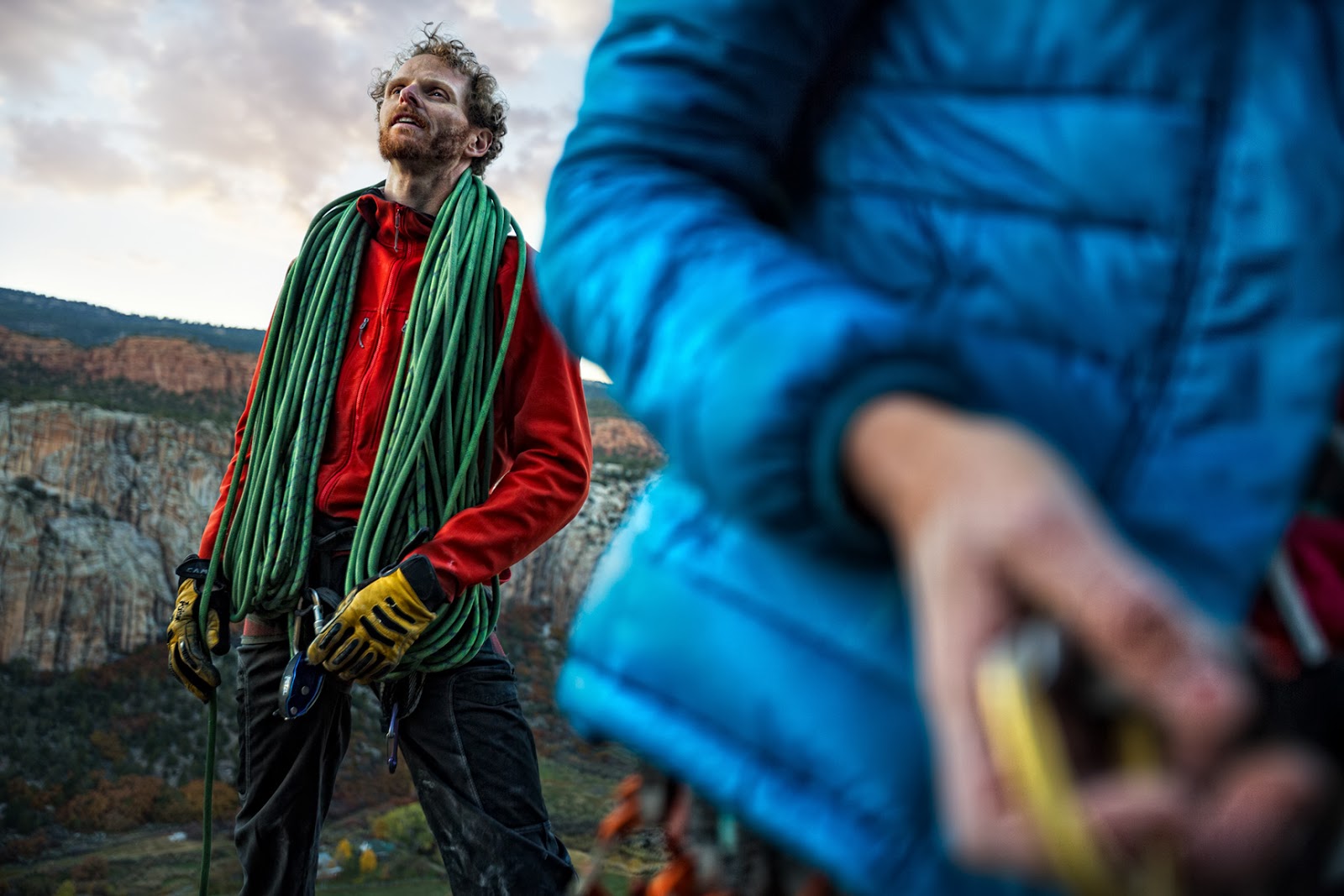